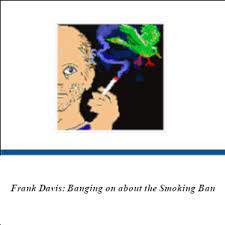 In October Freedom2Choose was saddened to hear Frank Davis has gone to the “smoky drinky” in the sky. An unrepentant smoker he passed away in his sleep at the age of 73. Through his blog, Frank reached thousands, headlined Banging on about the Smoking Ban.

I had the privilege to meet him 8 years ago and despite being outside, someone managed to moan about us smokers. Not many people know this, but he was a software and hardware engineer and worked on some of the first banking trading systems in the world.

An intelligent, quiet and unassuming man Frank will be greatly missed.

Frank Davis | Banging on about the Smoking Ban (wordpress.com)

The nanny state knows no bounds as New Zealand with its authoritarian Prime Minister Jacinda Ardern has decided to ban smoking by making anyone born after 2008 unable to purchase cigarettes. These are desperate days for the prohibitionists and leaves the black market to fill in the demand. Also because of the demonisation of tobacco just as many New Zealanders take Class A and B drugs as smoke. This is not joined up thinking.

Let me end on a positive note. If you are thinking of quitting smoking, don’t, it’s bad for your health! The more cigarettes you smoke, the less chance of being hospitalised and dying from Covid.